A recent question on the sustainability of peat moss bogs and the effects on the environment had me researching this issue. Peat moss has been used since the mid 1900" for soil enhancement by gardeners in the United States and the around the world. Many countries are moving away from the use of peat because of the destruction of the bogs and the possible environmental impact.

The problem with peat is the sustainablility issue and the storage of CO2 and it's release into the air when mined. Peat moss like trees stores or captures CO2. It helps with water filtration and is a habitat for many species. So what is an alternative for peat?  Should gardeners use more compost in place of the peat, or not use peat at all?

Peat is often used as a soil improver but other materials perform better. Since peat has little or no nutrient value. wood-waste, spent mushroom compost, composted garden or green kitchen waste, leaf mold or well-rotted farmyard manure are more effective and less expensive soil enrichers. Many feel gardeners should be composting more and not depending on peat or alternatives. That in itself is another discussion.

Another alternative and new to the market in the last several years is coir. I came to know this material while traveling through Sri Lanka in 2010. It is made from the byproduct of the husk from the coconut and was considered highly sustainable in that country. Coir is this country comes from the Philippines and Sri Lanka. It is considered by some a viable alternative to peat. It is, however, by many not a good environmental alternative because of the shipping considerations.

So, the conversation rages on with the industry saying it is OK and getting certification of sustainability and others saying we need to go to something else to maintain the bogs for a better environment. Many countries are  moving away from peat around the world and encouraging more composting and using waste materials to be used as an alternative to peat.

I tried to spotlight both side to the controversy in the articles below. Some say yes, some say no and some say depends. Two sides to every story.

For more information on the controversy.........Read and decide. It is a tough question.


Visiting the Flower show this week reintroduced me to a wonderful little bulb that blooms first in late winter early spring. I see it annually at the Horticulture Center, snow on the ground and beautiful green with white flowers. Galanthus or "Snowdrops" are of the family  Amaryllidaceae. 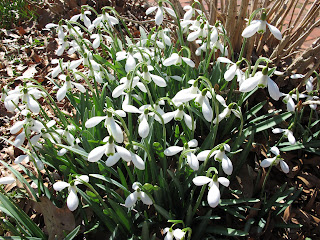 Used in many gardens as mass plantings for naturalizing, they can also be planted in rock gardens, in the front of borders and along walkways that usually do not have other plantings throughout the year. Blooming at about the same time as the winter aconite the galanthus peeks through the snow and thus is commonly called a snowdrop. Recently in Philadelphia the historic gardens of Awbury ( snowdrop information ) had a walk through the grounds discussing the flowers that have probably been on the grounds for over 100 years. 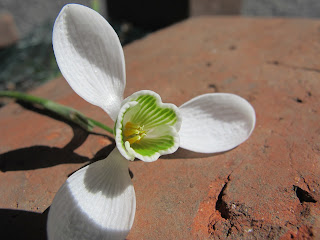 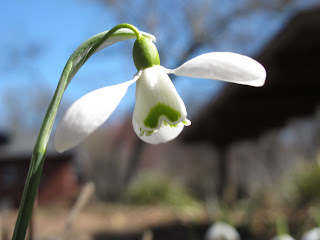 To learn more about the Galanthus:
Martha Stewert Video on Galanthus

Posted by gardenersthoughts at 10:31:00 PM No comments: 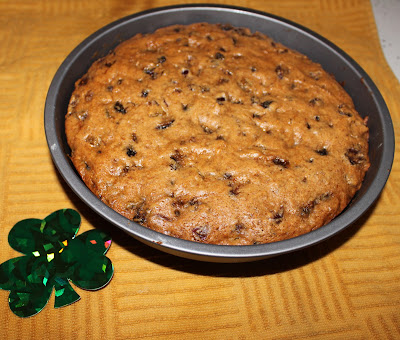 If you are looking for something interesting, fun and traditional to add to your St. Patrick’s Day celebrations, consider baking a loaf of Irish Barmbrack.  I know what you’re thinking – I’d never heard of it either – but trust me, it’s delicious.

As luck would have it, I stumbled upon this recipe just in time to bake a few loaves for St. Patrick’s Day.  I spent the better part of last year making jams, preserves, candied citrus peels and marmalades.  I have been searching for interesting recipes that incorporate some of my home made creations ever since.  As you may imagine, there are very few recipes that actually call for preserves as an ingredient, as they are best smeared on slices of bread and biscuits baked on cold winter days.   I was particularly excited to find that Barm Brack incorporates the preserves directly into the batter!  The recipe provided below allows for several cups of dried fruit.  I recommend currants (or raisins if you can't find any), chopped figs, cranberries, cherries and plums along with lemon or orange marmalade.

So, enough about my preserves, let's talk about Barm Brack!  This is a dense, lightly spiced, baked good containing dried fruits soaked in tea (or brandy, if you’re over 21 and adventurous), marmalade and hints of cinnamon and nutmeg in the batter.  This ‘loaf’ falls pleasantly in between bread and cake - too sweet and dense to be considered bread, but too much like bread to be considered cake.  It is traditionally baked in a round or bundt pan, sometimes the yeast version is baked in a bread pan, and some like the free-standing round loaf that you form with your hands on a cookie sheet.  Whatever shape your family prefers their Barm Brack to be, it is known for being sliced, toasted and served with a healthy slab of butter. 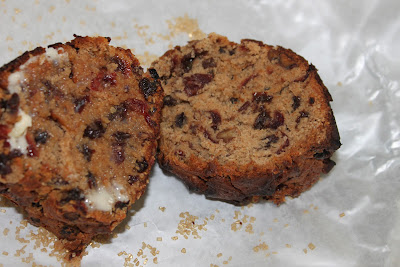 There are 2 ways to bake your Barm Brack - with yeast or without.  I’ve included detailed recipes for both the quick bread and the yeast versions at the end of this blog for you to try at home.  I recommend the quick bread recipe, as I prefer the taste and density of this version, although both recipes produce a yummy treat.

Barmbrak, also referred to as Barm Brack or Báirín Breac, can be translated directly from the Irish (Gaelic).  Literally, it means speckled loaf: Báirín (loaf) Breac (speckled), thus named because when cut into slices, the exposed loaf is speckled with the fruit and candied rinds.  Some say the fruit was purposely added as a distraction for the small fortune-telling items that were baked inside.


Originally, Barm Brack was baked specifically for Halloween celebrations.  Small trinkets were wrapped in greaseproof paper (a wax paper-like material) and baked into the Barm Brack.  Items included a pea, cloth, a ring, and even a small statue of the Catholic Virgin Mary.  Party-goers would choose their piece and search their slice for one of the items inside, predicting their future for the next year.

These days, it's most common to find just a ring baked into the Brack.  See photos for the most traditionally known items and the fortunes they told.  During the Halloween season in Ireland, packaged Barm Brack is still sold with the ring baked inside.

During the rest of the year, it can usually be found (without the ring) at grocers and bakeries, as it remains a popular teatime cake in many Irish families.  It’s also been known to make an appearance (with or without trinkets) at various other celebrations, festivals, family gatherings, and holiday parties... Saint Patrick’s Day included!

If you would like to include the fortune telling items in your Barm Brack, you can collect them (dollar stores and party stores are the best), clean them and wrap them in wax paper.  Instead of adding them to the batter, which is not really safe or sanitary, when the Barm Brack has been baked and is finished cooling, as you turn it out of the baking tin, push the wrapped items into the bottom, then set it on the plate.  Slice carefully, noting where you’ve placed the trinkets.  Don't forget to remind guests that they might find items in the bottom before everyone chows down!  No one wants to have to perform the heimlick maneuver at their St. Patrick's Day party. 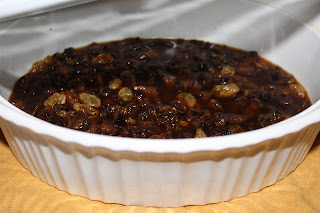 
Grease a 9 inch bundt pan, or round bread tin.


Stir together the flour cinnamon, nutmeg, and baking soda; set aside.

Beat the egg and sugar until mostly disolved.

Gently fold in the flour until just combined, then pour into the prepared Bundt pan.

Bake in preheated oven for 1 hour or until the top of the cake springs back when lightly pressed.

Allow to cool in the pan for 2 hours before removing.

Continue to cool to room temperature on a wire rack.

Press the objects of choice into the cake through the bottom before serving. 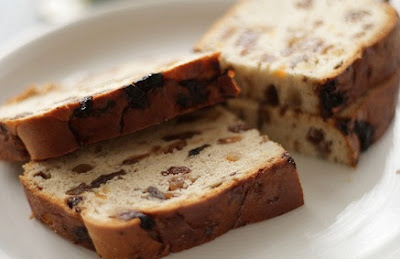 DIRECTIONS
Sieve the flour, spices and salt into a bowl, then rub in the butter.

Pour the remaining tepid milk and the egg into the yeast mixture and combine with the dry ingredients and the sugar. Beat well with a wooden spoon or knead with your hand in the bowl until the batter is stiff but elastic.

Fold in the dried fruit and chopped peel, cover the bowl with a damp cloth or pure clingfilm and leave in a warm place until the dough has doubled in size. Knead again for another 2-3 minutes and divide between two greased 1 lb loaf tins.

Cover again and leave to rise in a warm place for about 30 minutes to 1 hour or until the dough comes up to the top of the tin. Bake in a preheated 350° oven for about 1 hour. Test with a skewer before taking out of the oven.

Glaze the top with the sugar dissolved in the boiling water. Turn out to cool on a wire tray and when cold cut in thick slices and butter generously.

* This Barmbrack recipe keeps well, and can be frozen... but it's unusually delicious when it's gone stale, toasted and buttered.

* * *
IRISH TEA CAKE
This is a traditional Irish recipe, but it has nothing to do with Barn Brack.  If you are in the mood to bake after reading this blog, and want something simple, perhaps for the morning after your celebrations, try this super-easy, traditional, any-time pastry, Irish Tea Cake.  Goes well with Irish Coffee, as well as your average coffee break or tea time. 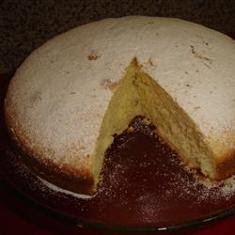 In a medium bowl, cream together the butter and sugar until light and fluffy. Beat in the eggs, one at a time then stir in the vanilla.
Combine the flour, baking powder and salt; stir into the batter alternately with the milk. If the batter is too stiff, a tablespoon or two of milk may be added.
Spread the batter evenly into the prepared pan.

Bake for 30 to 35 minutes in the preheated oven, until a toothpick inserted into the center comes out clean. Cool in pan on a wire rack, then turn out onto a serving plate. Dust with confectioners' sugar right before serving.

Philadelphia Master Gardeners
Seed Starting Guide
These dates are based on the Average Last Frost Date for the central parts of the city: April 20th. Higher and      more outlying parts are a week or two later. Adjust recommended dates for warm weather crops accordingly.
Crops marked with a * are usually planted directly outside on or after the first setting-out date.

For advice and information on all gardening topics e-mail or call the
Penn State Extension Philadelphia Master Gardeners HortLine
PhiladelphiaExt@psu.edu or 215.471.2200 ext 116

Posted by gardenersthoughts at 10:43:00 PM No comments: