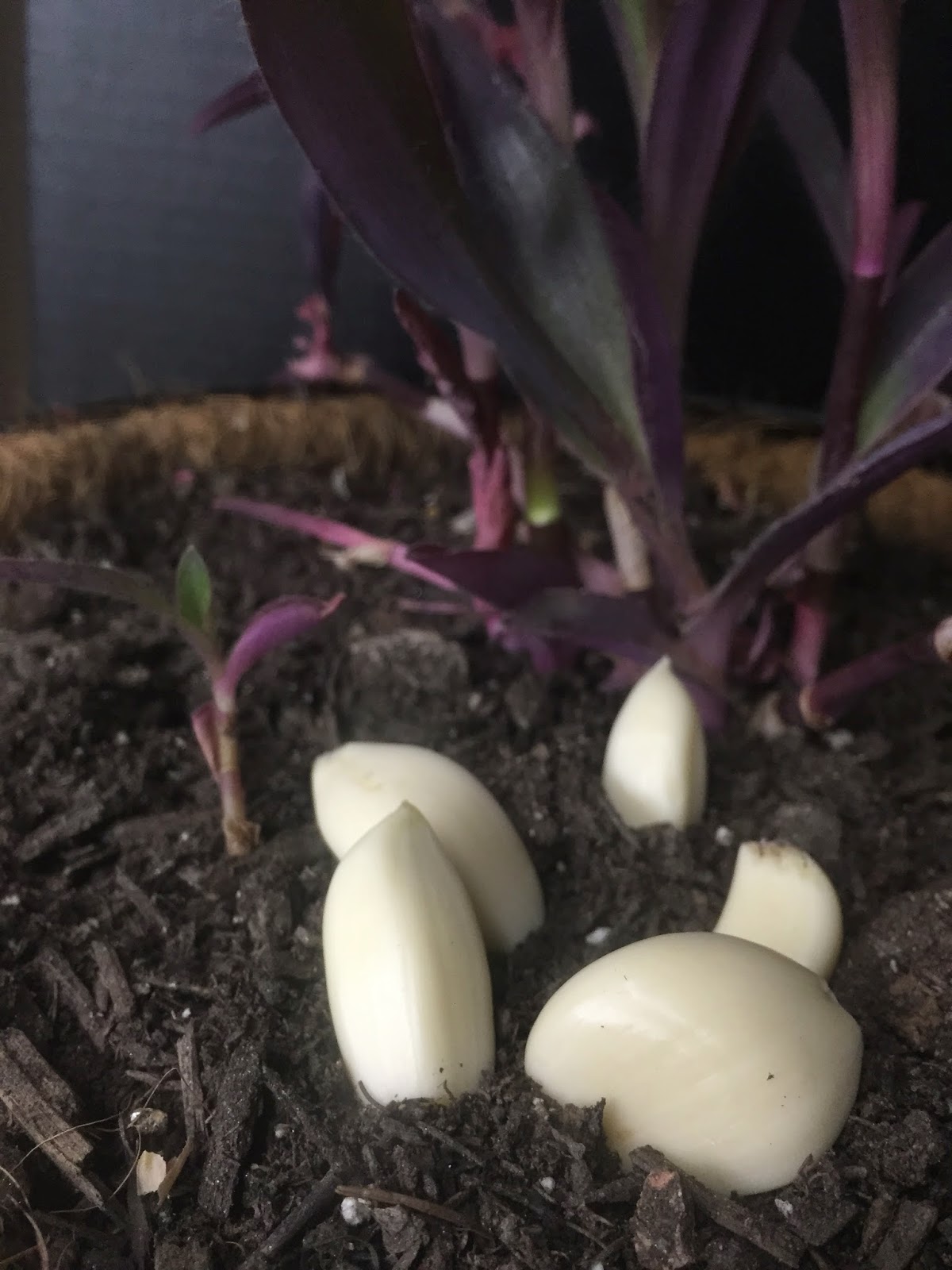 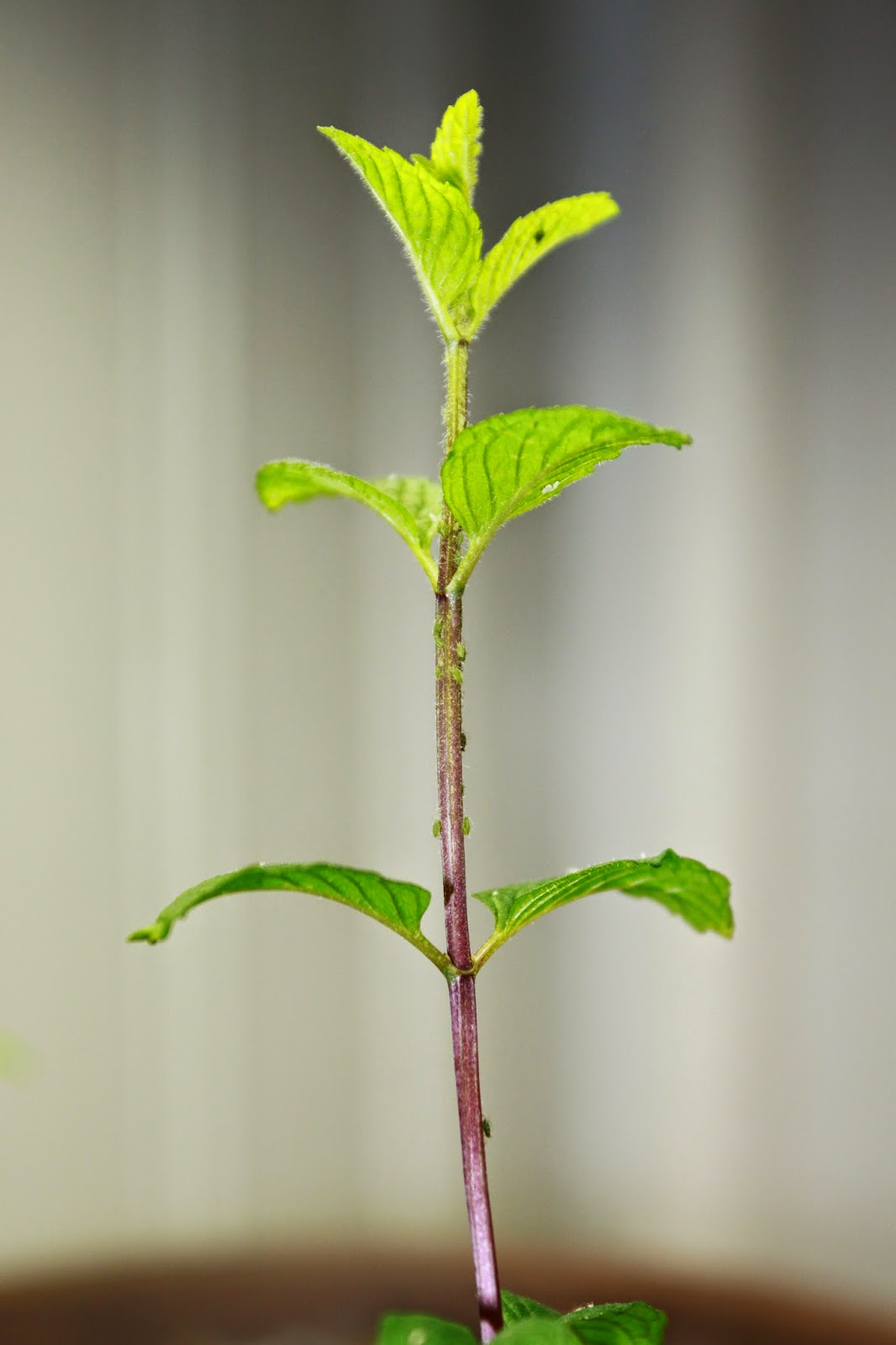 When the weather makes outdoor gardening impossible, like many of you out there, I keep a small selection of edibles and ornamentals in the bay window of my Manayunk apartment, where I also cluster my kitchen herbs and houseplants to survive the winter. Indoor gardening requires a slightly different point of view.  You don’t have to worry about pests like squashbugs, finding their way into your zucchini patch.  But, there are a few stealthy intruders out there that can survive happily in both your outside and indoor garden projects, like mites, aphids and whiteflies – and if those whiteflies find their way into your houseplants, you don’t have the benefit of natural predators like birds swooping in to snack on the insects.  The management is all up to you. 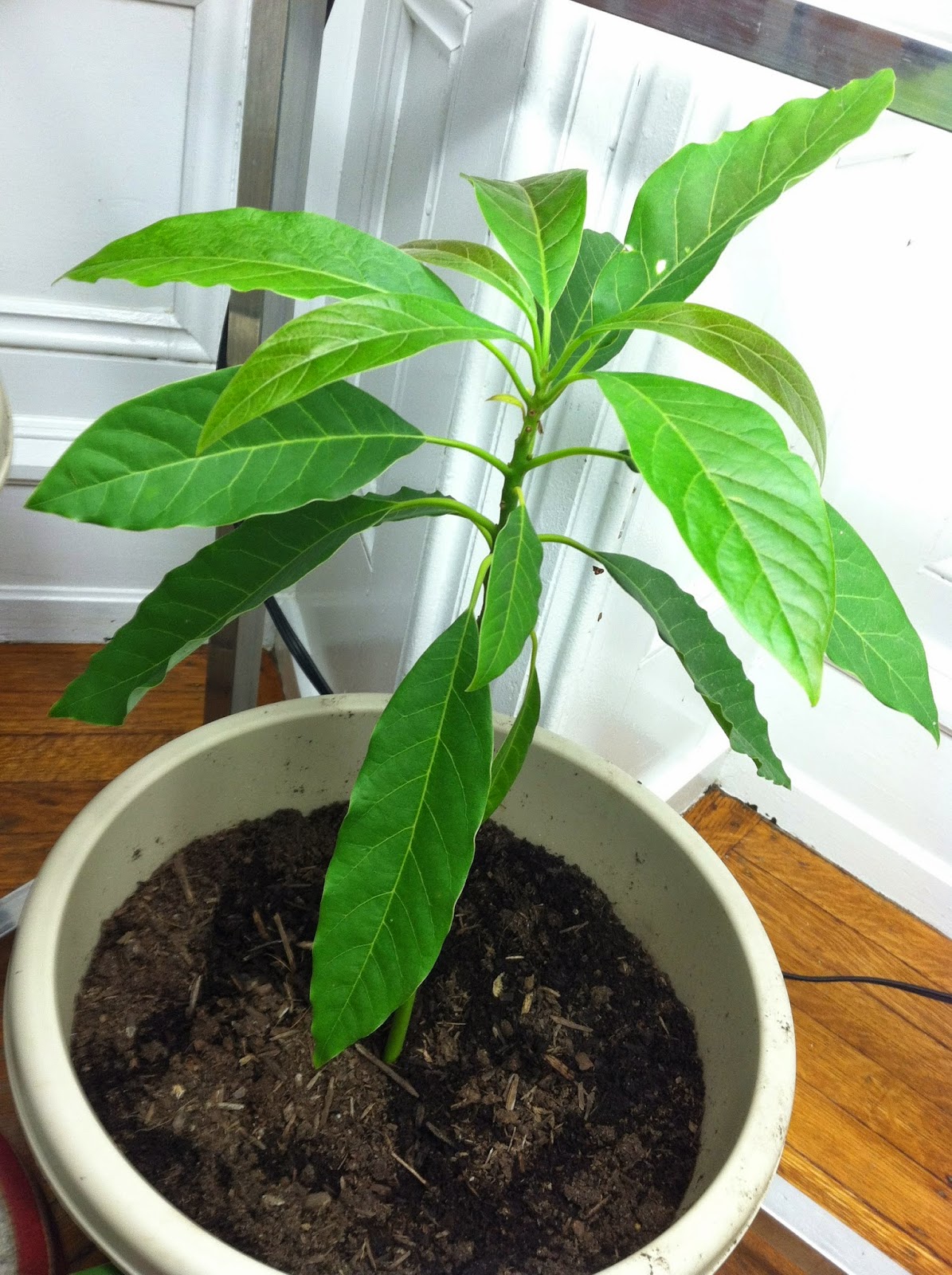 It happens to the best of us.  No matter how diligently you prepare your indoor garden, even the best of practices cannot prevent Mother Nature from creeping in and having her way one hundred percent of the time.  Especially inside.  I follow most of the basic preventative practices when growing indoors. Water less.  The plants aren’t as thirsty and the dry soil helps prevent a number of pests, molds and fungi from setting in. Feed less, and more naturally.  Avoid tap water.  Mist plants.  Keep an eye out for invaders.  Put out traps before you see a pest.  Most importantly, keep careful watch over your favorites!  Somehow, these insects and arachnids know which plants you hold most dear.  This year, they chose my 28-month-long project, the avocados I’ve been growing from discarded seed.  I have raised several and they function happily as houseplants, filtering the stuffy apartment air and keeping me occupied during snowstorms. 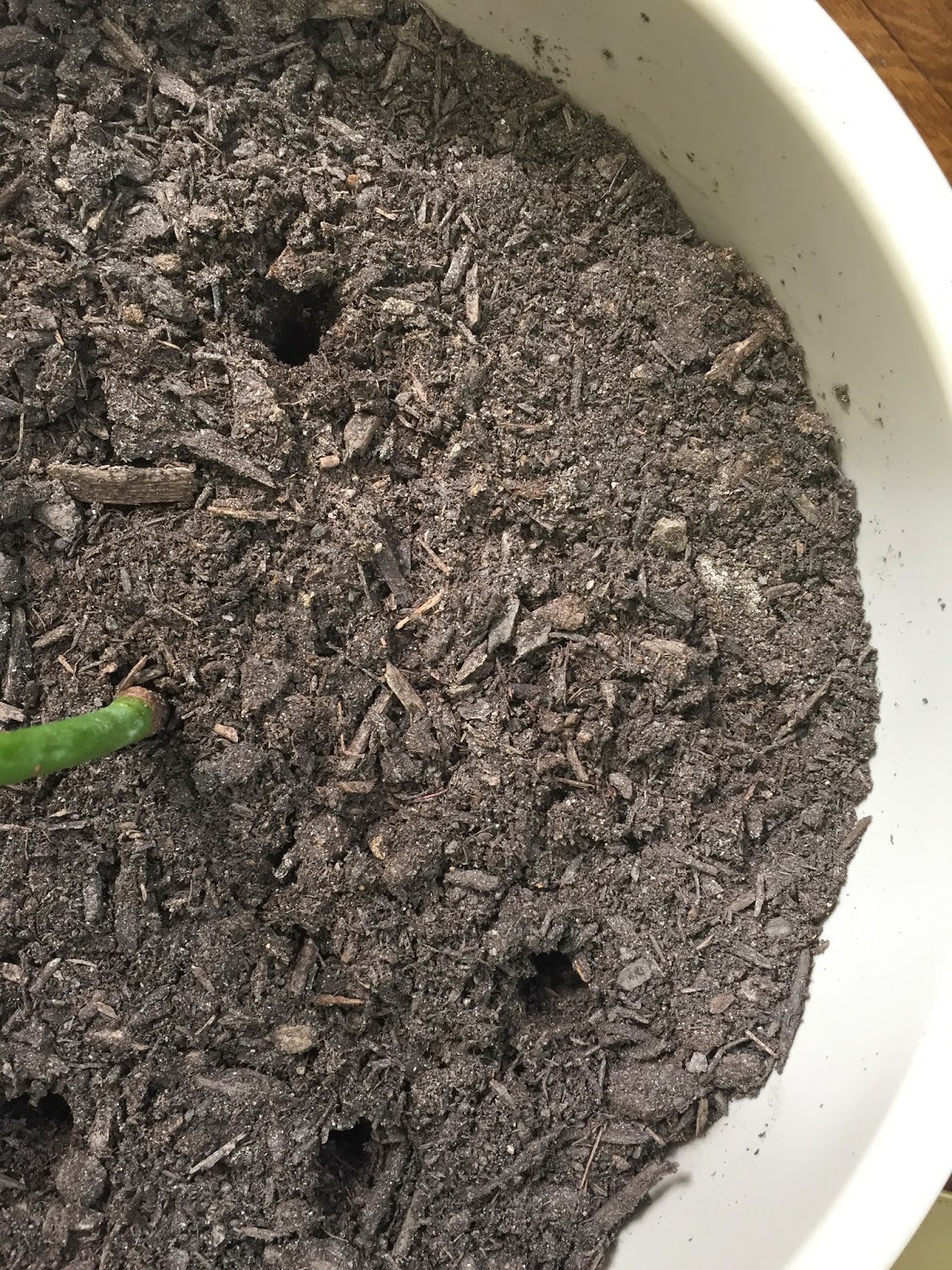 I thought my precautionary tasks had proven successful and was basking in my pest-free glory… until I saw the holes, the small ½” holes peeking through the soil surface of my largest and oldest of the avocado collection.  The holes were too perfect to have appeared as a result of watering, and I hadn’t been sticking my fingers in the soil, although that’s how it looked.  The plant stood strong, no visible signs of stress or damage.  I scratched my head, snapped a photo for future research, and went on about my task – being sure to pinch off the soil surface holes, hoping to force the pest to reemerge by closing off the tunnels. I should've known better, done more.  But I didn't, and I paid the price. 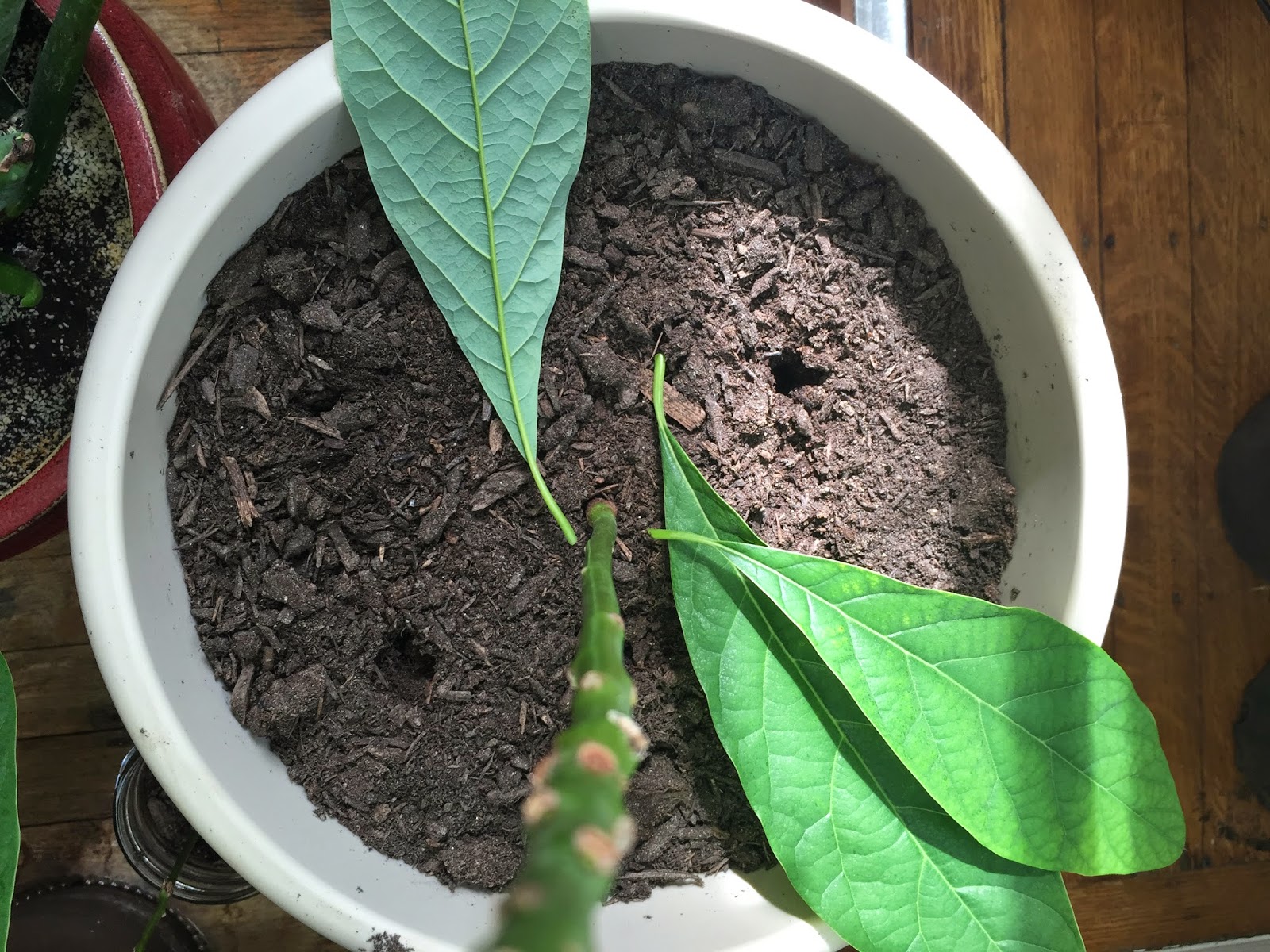 Two days later I had to pack up and leave town for a week.  The pest most definitely returned in my absence.  Arriving back home 6 days later, the holes were back and the avocado had been stripped.  EVERY SINGLE LEAF had either fallen or been clipped off.  This meant war.  I removed the plant in its entirety from the container to reveal dozens of well-fed beetle grubs enjoying the tender roots of what was a thriving 2 year old avocado sapling just a week ago.

Suddenly everything made sense! 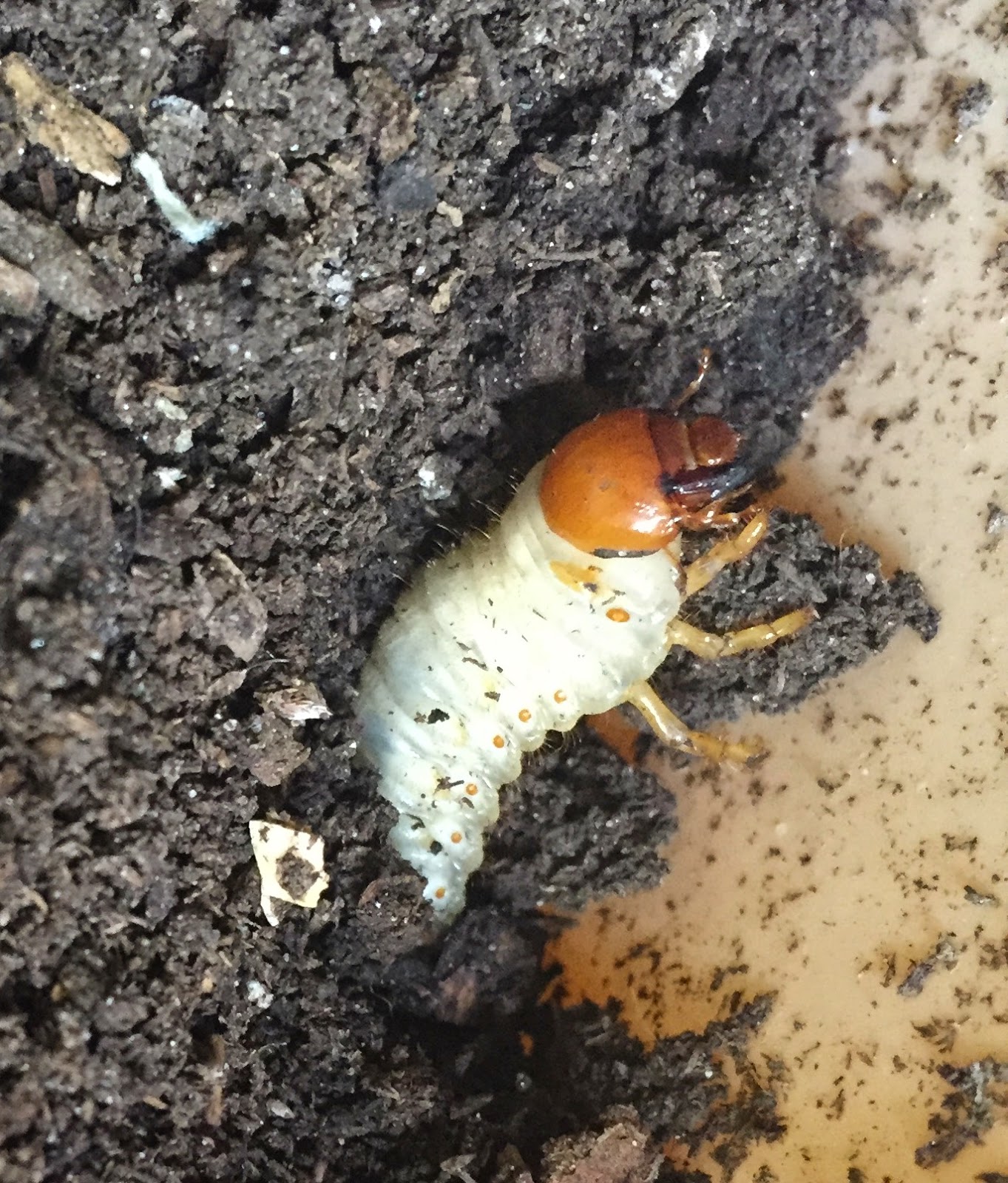 Remembering the Japanese Beetle, who made its way into my apartment back in August, I knew I'd been defeated.  I didn’t kill it because I’m a softie, and try not to kill every bug that intrudes in my home.  I didn’t chase it outside again, because I didn’t want to send a Japanese Beetle into my back yard garden, or my lawn to breed.  Instead, I chose to endure her buzzing and kept her captive in my entryway.  Little did I know that this perspicacious little beetle was cozying up under my avocado tree to lay her eggs, but the proof was in the larva.  Oh, so many larva!  I'm sorry, Mama Beetle.  I plucked them out and fed them to the birds. 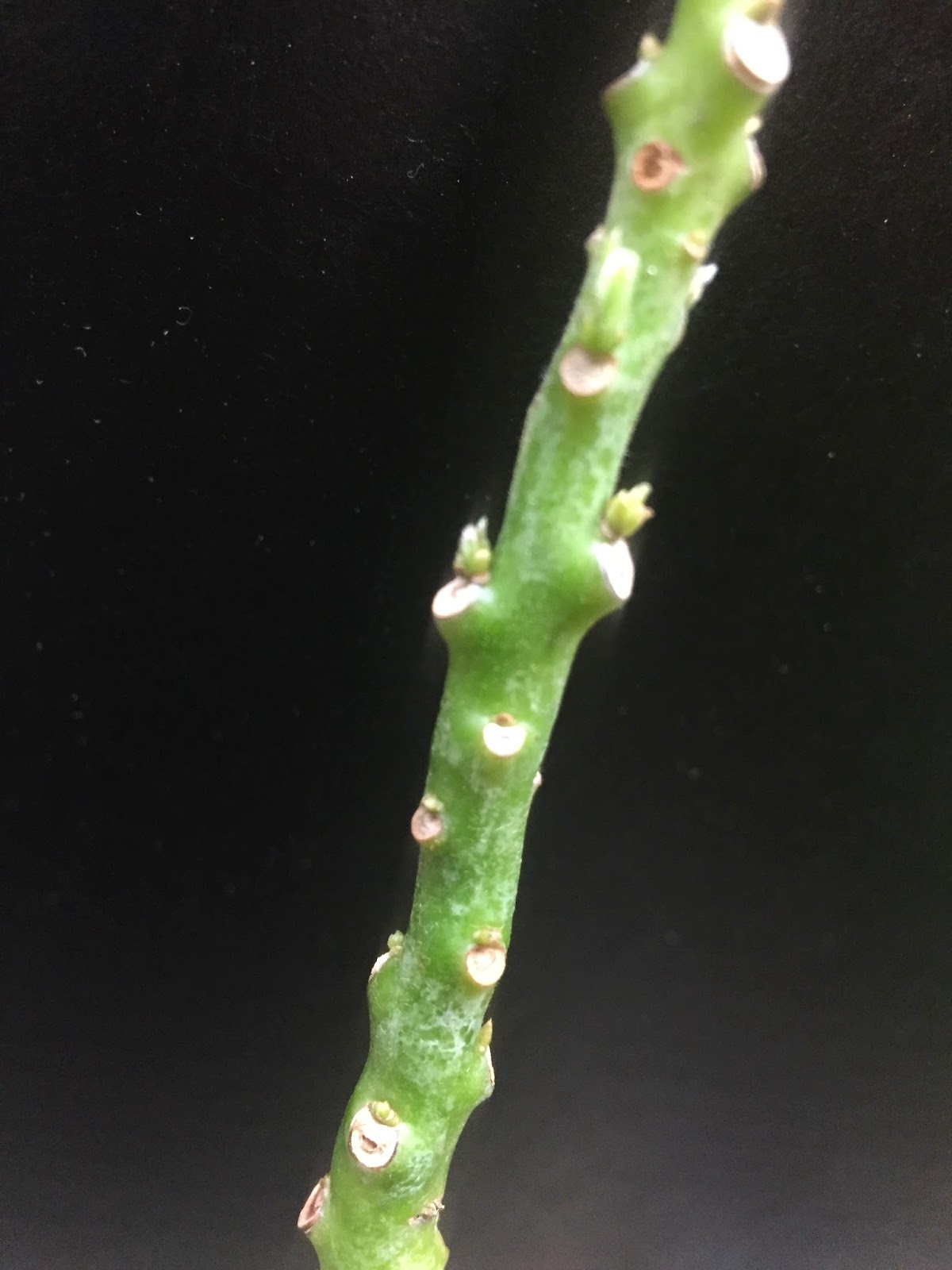 After a good rinsing, a new pot and some freshly purchased premixed potting medium, the avocado is now replanted and starting to show new signs of life.  I haven’t given up, especially not so close to Spring!  But it’s going to be an uphill battle.
Although you may not be able to prevent a sneaky 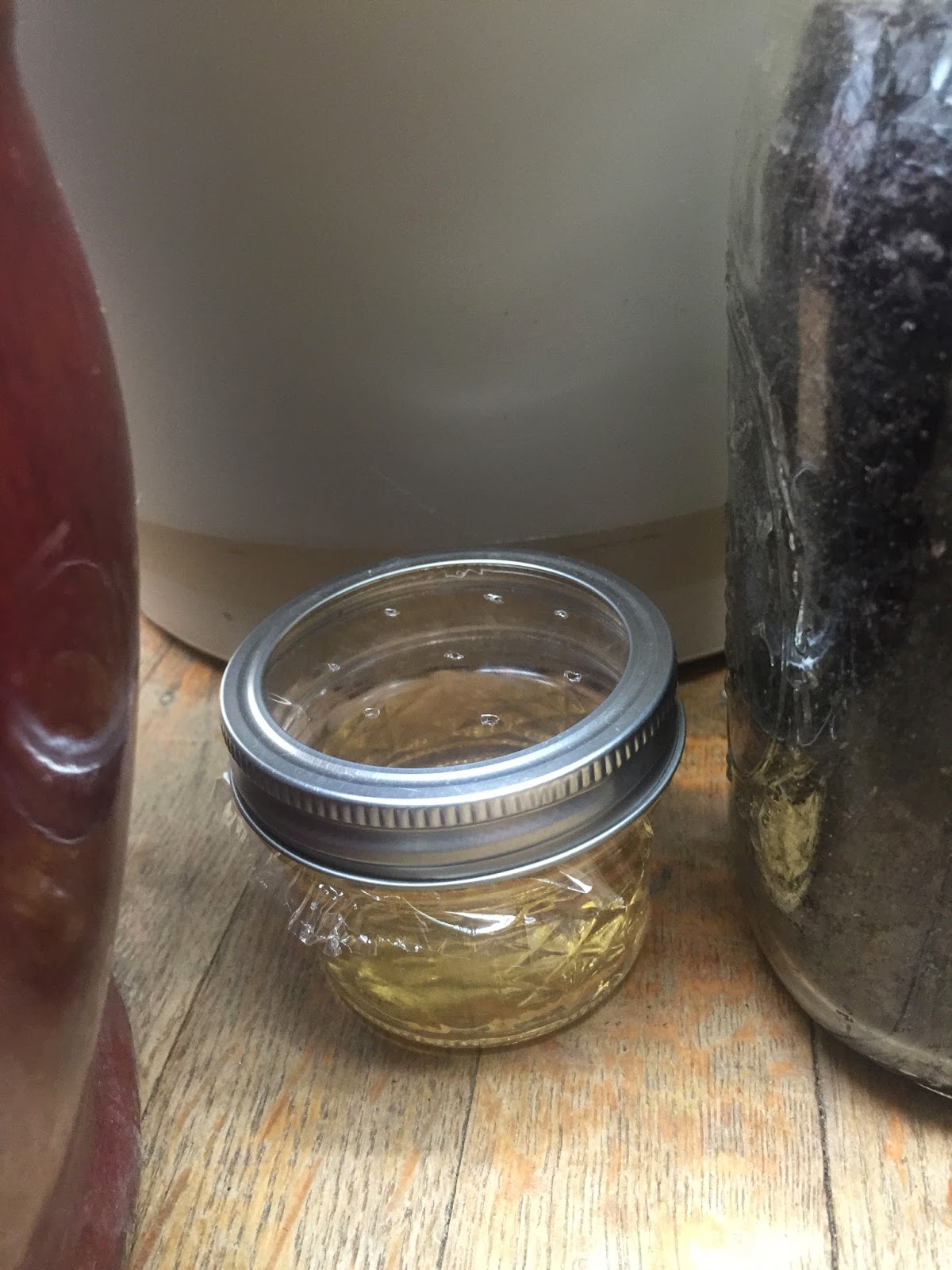 beetle from laying her eggs in your plantlings, there are a few tricks you can make at home and keep on hand to manage pests that creep into your houseplants from the garden, back porch or that hole in the window screen you’ve been meaning to fix.  Some will even work outside in the garden. I keep all of the following materials and ingredients handy in my plant pantry, along with a few clean spray bottles, for plant emergencies.  They happen more often than you'd think! 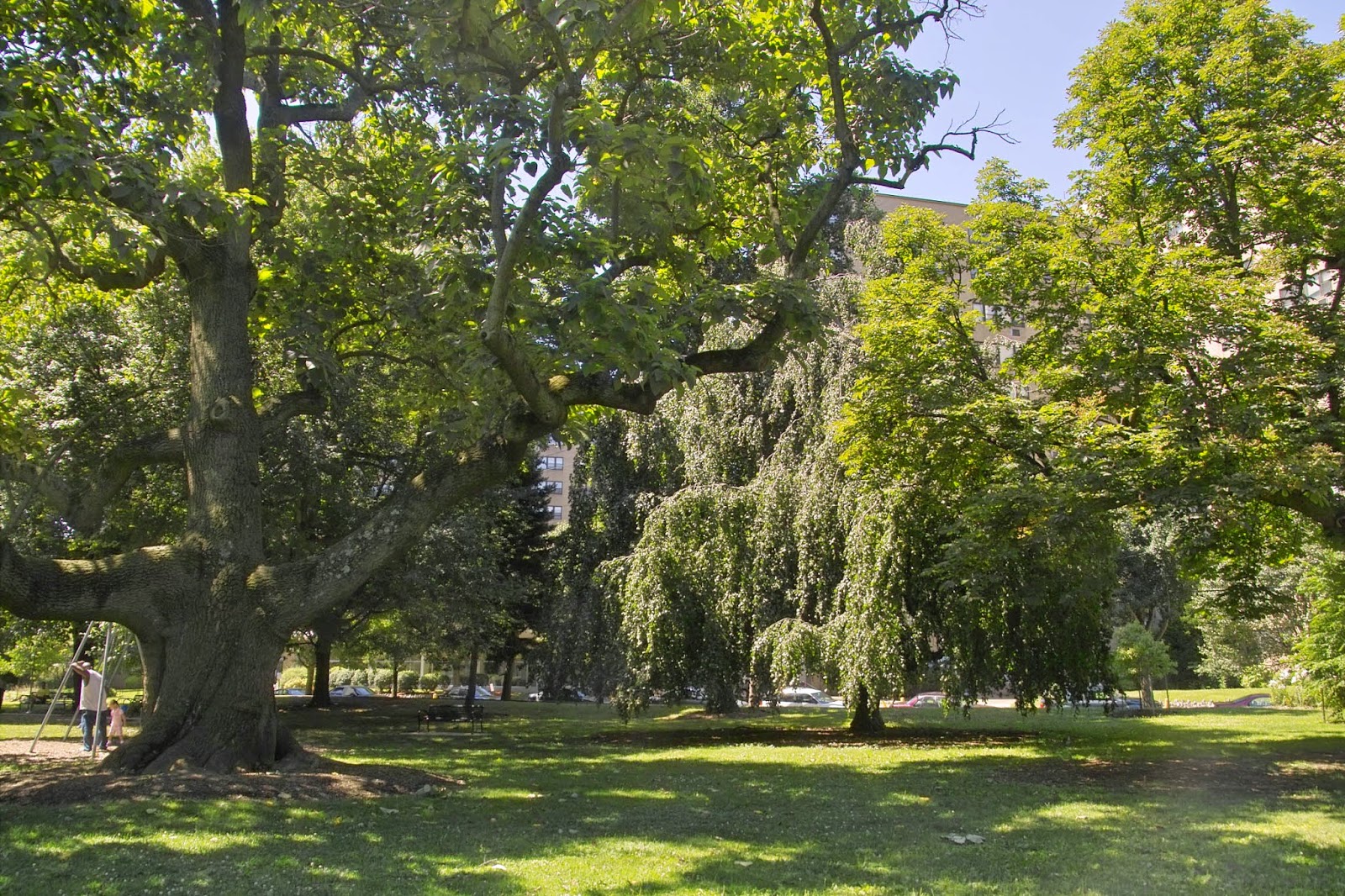 Today, Cloverly Park in west Germantown is a beloved neighborhood jewel: a place to sit in the shade of century-old trees, to enjoy the toddler-friendly play equipment, and to wander on quiet paths among an array of flowers from March to October.

In 1916, Cloverly Park, a two-acre parcel donated to Fairmount Park by the E. W. Clark family and once the site of its “fine mansion,” was lovely enough to warrant placement of Paul Manship’s “Duck Girl” sculpture that now graces Rittenhouse Square. 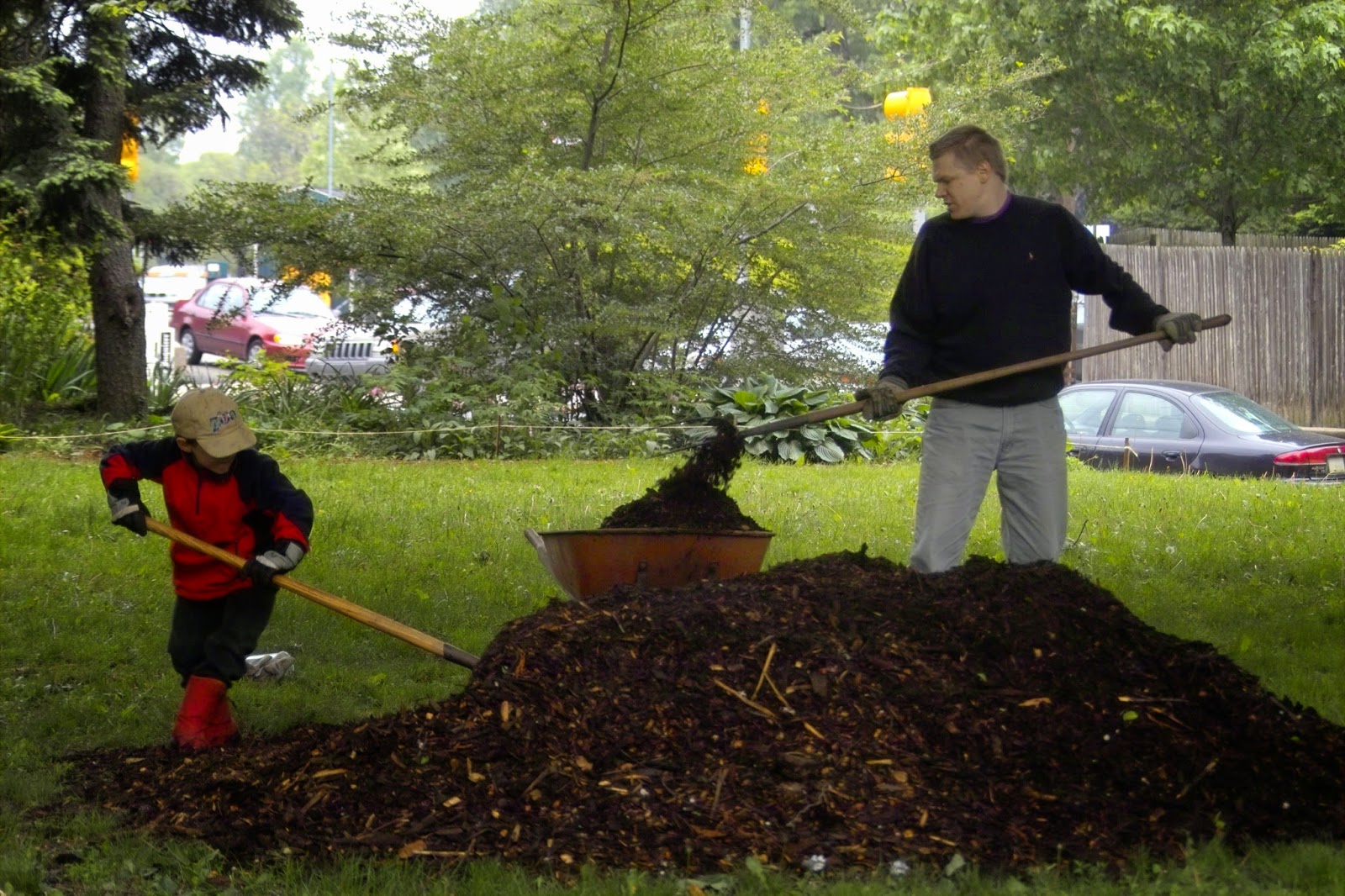 Thirty years ago, though, it was a weed-choked ruin used by drug dealers and prostitutes. Enraged by rapes in the park in the mid-1980s, the neighbors had had enough. With the bare-bones Fairmount Park staff overwhelmed and underfunded, a small group of people led by Hap Haven and the Westside Neighborhood Council took matters into their own hands.

They removed abandoned cars and filled in deep ruts. Invasive species, including mature Ailanthus and poison ivy as thick as ropes, were chopped down, pulled out, and hauled away. And they filled bag after bag with trash and garbage.

Over the next decade, a dedicated group continued the reclamation. Their goals were to provide a safe place for families to bring young children to play and to create a beautiful public garden and mini-arboretum.

In 1993, Hap was joined by neighbors Cecelia McColgan and Julie O’Connell in working with Fairmount Park to secure a $50,000 allocation for large-scale improvements, including installing play equipment for toddlers, removing dead and diseased trees, and constructing an herbaceous perennial border. Through small grants from Weaver’s Way Environmental Committee, the group was able to augment donations of plant materials from the park’s friends and neighbors and enlarge the gardens.

Mayor Ed Rendell was so impressed with the group’s accomplishments that he accepted the group’s invitation to attend Cloverly’s rededication in 1996 and presented awards to Hap, Cecelia, and Julie. 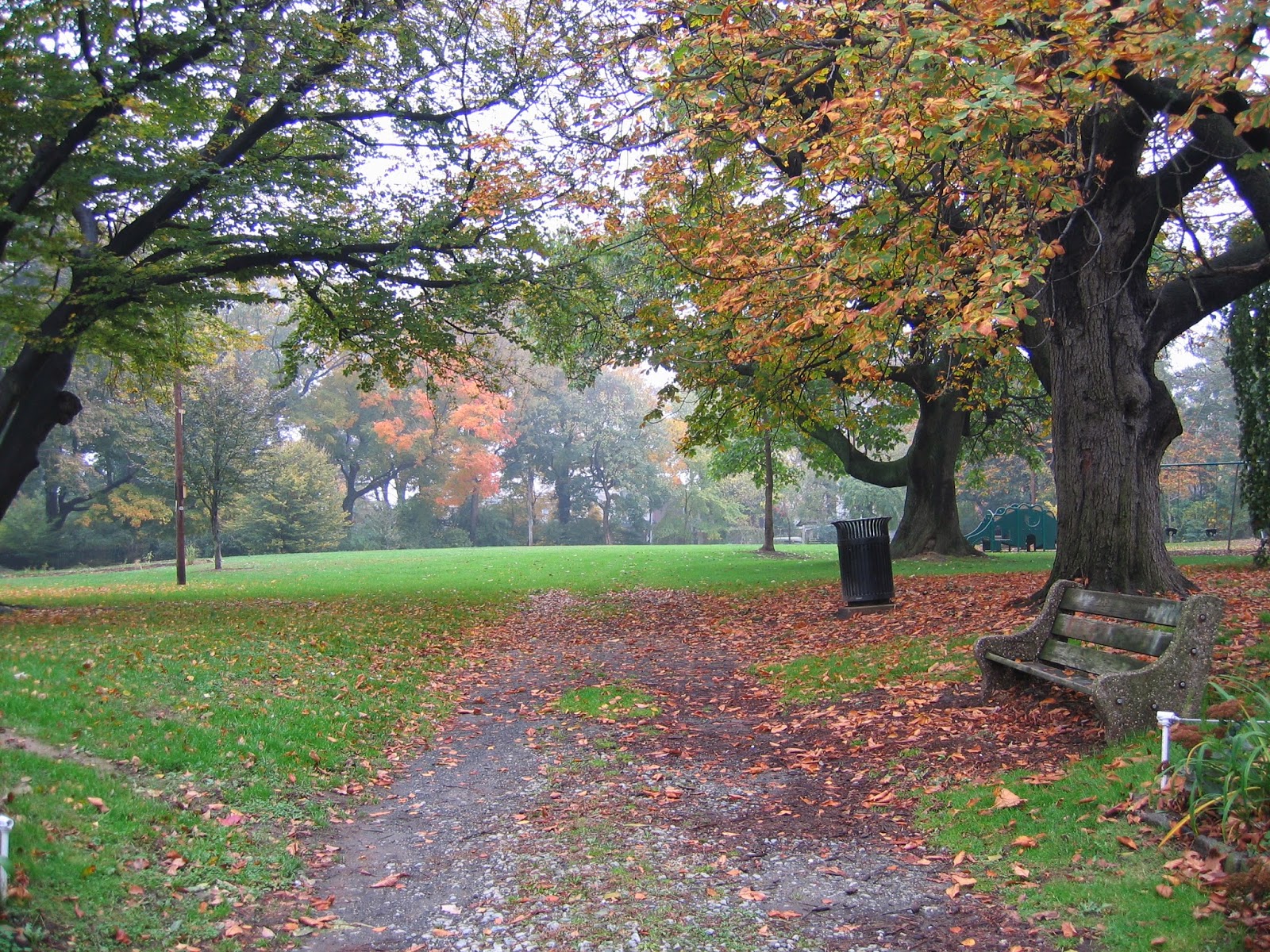 The Friends of Cloverly Park were well known as successful, resourceful park stewards when the mayor’s office began its Growing the Neighborhood program, and in late 2004, Cloverly was selected to receive $20,000 in improvement funds. Through the efforts of the large volunteer team, the award funded installation of extensive border gardens; 1,000 feet of fencing; a new brick entrance, six new trees, dozens of shrubs to create a green “buffer” between the park and adjacent residences, and arbor care for the park’s mature trees, some of which were planted before the early 1900s.

With subsequent improvement grants through the Pennsylvania Horticultural Society, matched with donations from the park’s neighbors, including Post Brothers, the group replaced the park’s old wooden benches, many of which had been vandalized or were in disrepair, and planted more trees. Neighbor Ted Ellerkamp contributed countless hours to rehabilitate a barren area into an inviting shaded "pathway garden" that connects the deep shade garden to the park’s sunny “meadow" area. 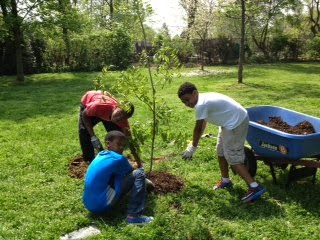 In the last two years, largely through the Fairmount Park Conservancy’s free tree program for park groups, the Friends of Cloverly have planted an additional 13 trees as part of their ongoing effort to ensure successors for the park’s mature trees. And every year, flowering plants of many kinds are added into the park’s borders to increase color and texture.

The park logs in more than 1,200 volunteer hours every year. Among the park’s best friends are the men of Drexel University’s chapter of Pi Kappa Alpha, who have contributed more than 1,000 hours since 2005 and who helped with many of the major projects during the Growing the Neighborhood initiative. 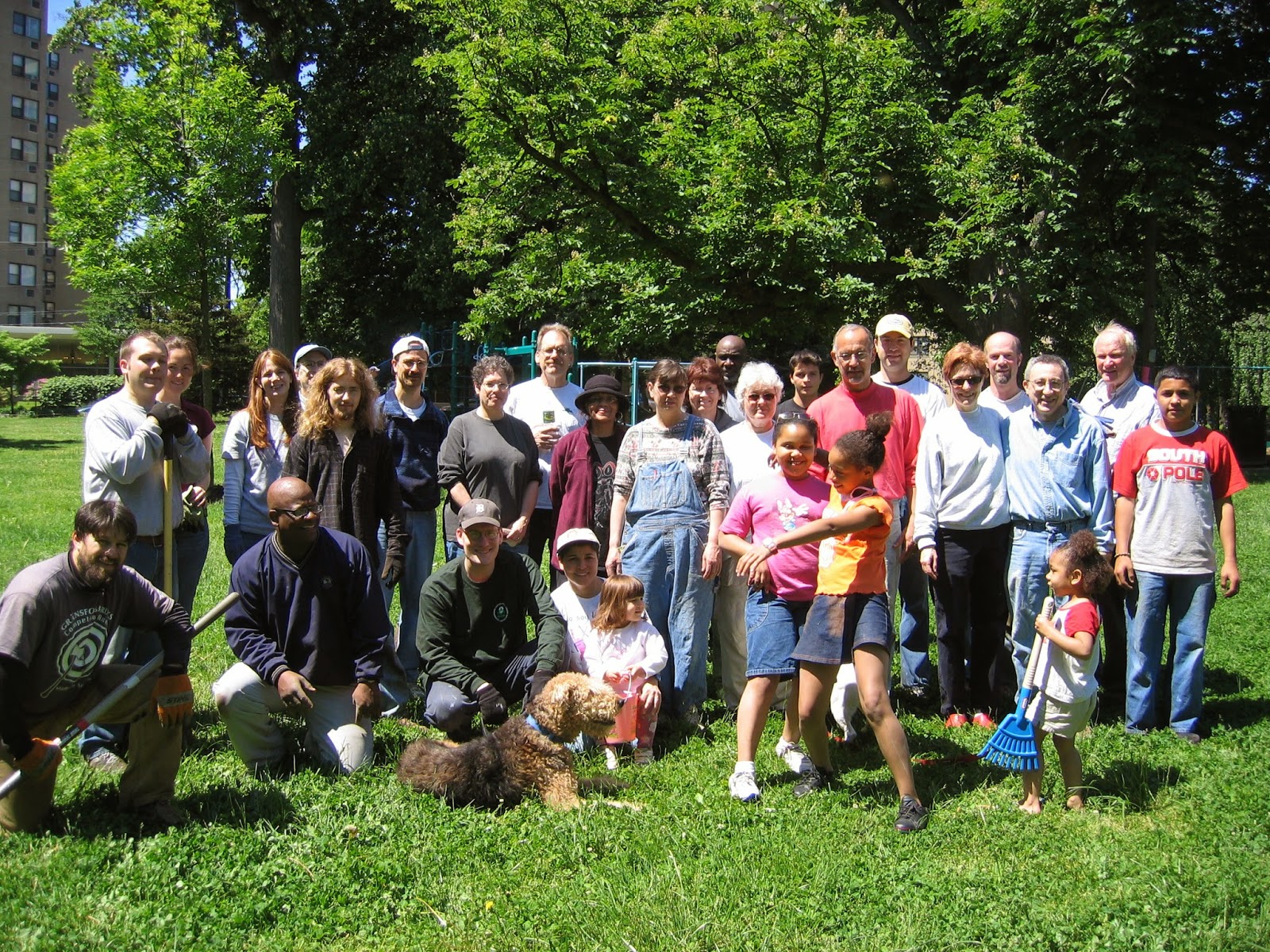 While new people continue to join, many of the original volunteers remain
actively involved, including Hap Haven. Ellen Wert, Mark Kearney, Kathleen Wert, and Mark Bardsley are leaders of Friends of Cloverly Park, providing hours of dedication and effort to make Cloverly one of the loveliest public parks in the city. They organize twice yearly clean-up days that are enthusiastically attended and, recently added an annual plant sale.

Cloverly was awarded first prize in PHS’s City Gardens Contest in seven of the last eight years, taking second place in the remaining year. In 2014, the park was named a “Garden of Distinction” by PHS for “motivating people to improve the quality of life and create a sense of community through horticulture.”

Margaret Meade said, “Never doubt that a group of thoughtful committed citizens can change the world…” The Friends of Cloverly Park have most assuredly proved that Meade was right. 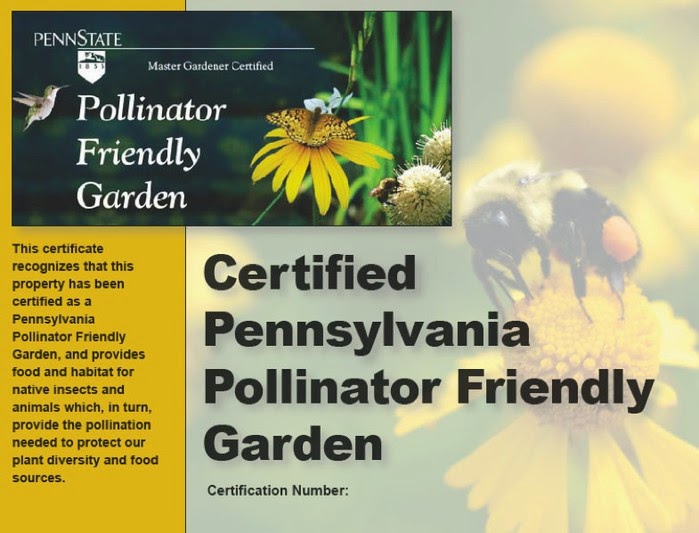 Most gardeners know that plants need fertile soil, sunshine, water, and air to thrive. A growing number of gardeners also appreciate that most plants need pollinators. These insects and animals work tirelessly transferring pollen between plants to produce the seeds of the next generation. Many people think of pollinating critters as the ‘birds and the bees’ but butterflies, bats and ants are also examples of these hard working creatures.


Pollinators evolved over the course of millions of years with most plants to exhibit the symbiotic relationship we see today. However, the balance in this system has been significantly disrupted from dwindling habitat, disease pressure, and increased pesticide use. Gardeners can help pollinators overcome these challenges by cultivating pollinator gardens, which focus on plants that serve as food and shelter for insects and other animals that do the work of pollination. Many resources are available to guide plant selection and design. A few basic rules are:


1.      Choose native plants whenever possible because these selections generally provide a food source to the greatest number of pollinators and are known to provide food for insect’s larval stages.


2.      Cultivate plants with that will provide a bloom succession to supply food throughout the year for a spectrum of pollinators.


3.      Arrange plants in clusters, not single or spotty flowers, to provide a visual cue that helps pollinators find their food.


Penn State College of Agricultural Science Outreach Office offers a pollinator garden certification that verifies a gardener’s commitment to conserving pollinator habitat. The application requires information including plant selections that serve as sources of food and shelter, providing a source of water and reducing or eliminating pesticide. A $10 application fee is a donation that helps support Penn State Master Gardeners continuing education of the public about the importance of providing habitat for pollinators


Gardeners can find inspiration for creating and sustaining their own pollinator garden by visiting the Penn State Extension Master Gardeners of Philadelphia amazing pollinator garden on the grounds of the Horticultural Center in Fairmount Park.


US Fish and Wildlife: http://www.fws.gov/pollinators/